The Art of Massage

The Art of Traditional Thai Massage

« When any person is sick at Siam (Thailand) he begins we causing his whole body to be moulded by one who is skilful herein, who gets upon the body of the sick person and tramples him under feet. »

The origins of Traditional Thai Massage can actually be traced back over 2,500 years to it’s founder Jivaka Kumar Bhaccha.  He was thought to be a doctor from northern India and a source of knowledge in the healing powers of herbs and minerals, aspects of Ayurvedic medicine still found in Thailand today.. He was also thought to be a close friend the Buddha.  As such knowledge was always transmitted orally from teacher to student the exact origins and the additional influences of the Chinese concept of acupuncture are hard to trace.  However 60 figures, carved in stone, can be found decorating the walls of Phra Chetuphon (WatPho) Temple in Bangkok.  These date back to 1832 and were the surviving remnants from the Burmese invasion, along with the texts, that King Rama III had engraved as a theoretical basis of Thai Massage.

The Art of Thai Massage is based on these energy lines that run through the body, the 10 most important are known as Sen lines.  These 10 lines are sufficient to perform a full body treatment including the internal organs.  The existence of these lines for western science is mysterious and can only be validated by the relief and curing of certain diseases.  However the Indian influence on Thai massage is seen clearly in Yoga philosophy where Life Energy or Prana is absorbed from the air we breathe and the food we eat and channelled along a net work of energy lines or Nadis.  These 72,000 lines form part of a second  body known as the Pranamaya Kosha.

These lines can be thought of as « Rivers » which enable an exchange of cosmic energy, whereby the physical human body is maintained via the energy of the Universe.  Put simply disturbances in energetic Flow result in an insufficient supply of Prana and the health of the body deteriorates. 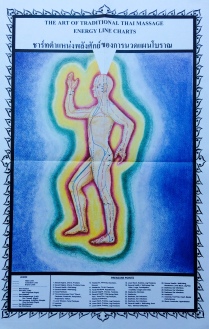 Working on these main lines via movements of the thumbs, palms and manipulating the body into various postures these energetic blockages can be broken down and the free Flow of Prana restored giving a sense of well being and health to the patient.

Traditional Thai Massage has always been considered a spiritual practice and in ancient times was always practiced in a temple, even today there remains a School of Massage at the Wat Pho temple in Bangkok.   The giving of a Thai Massage was considered to be an application of « Metta » or « loving kindness » in Theravada Buddhism; and it is with this attitude that I had the good fortune to learn this art.

The massage is performed with a meditative state of mind.  Starting with a Puja or prayer to centre the consciousness and create a contact between practitioner and patient.  The masseur then works with concentration, full awareness and mindfulness and in this deep meditative mood develops an intuition for the energy flow in the Prana lines and within the body, literally sensing the required application of movements.

Apart from daily meditation practices to keep the mind free and the practitioner healthy one of the techniques to acquire this state of mind is Mantra and its continued repetition throughout the massage.